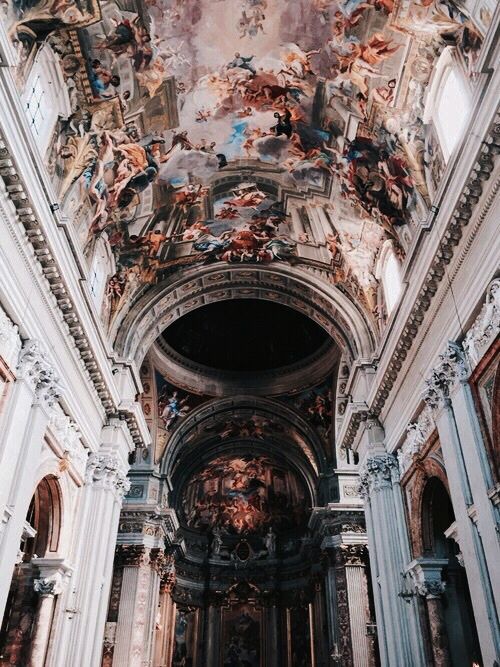 In the past year or so, I’ve begun to notice certain aspects missing in Christian “art”, aspects that should never be neglected. These missing aspects are most noticeable, to me at least, in music, film, and literature.

(Before I continue, I want to make sure I make clear that there are wonderful wonderful pieces of Christian art, that are genuinely excellent, meaningful, and conveyed with a sense of wonder. This post is for the mainstream pieces that generally are not of a high quality.)

I believe it is of the utmost importance that art conveys truth beautifully. As Charles Baudelaire once said, “Always be a poet even in prose.” Although this said in the context of writing, it applies to all aspects of life – even the most ordinary of tasks work and create as beautifully as possible.

The missing aspects I speak of are the above spoken.

As those who bear the image of the Most High and have been redeemed by Christ, the Creator of the universe, we should be thinking and creating more deeply and earnestly than those who have not found salvation.

Christian literature, films, and music shouldn’t be afraid of difficult topics, they should not speak of easy truths and tell stories without meaning. They should not be concerned with mediocrity.

And yet, I cannot say that I’ve recently read, watched, or listened to something supposedly Christian that inspired me to think and feel more deeply about my Savior, much less draw me closer to Him.

In addition to that, it is rare in these genres to find anything written, filmed, or composed in a way that is poetic and intelligent.

That’s not to say that there isn’t quality Christian art, it’s just that the superficial and flimsy stuff seems to outweigh that of a deeper standard.

Rather than finding something like The Tree of Life or Hostiles in Christian cinema, one finds films like God’s Not Dead. The first two films ask profound questions and are acted, filmed, written, and scored gorgeously. The latter film, is a mediocre piece of filmmaking with a somewhat cliche conclusion, not something that truly encourages deeper thought or feeling. (Although the message isn’t wrong, it isn’t executed well.)

Now, some Christian films have a lower budget, but that is no excuse for a lack of quality. One can still be inventive and thoughtful without much money.

In most Christian music one often hears songs that speak more of the person themselves than the Lord. “It could make me feel good things about Jesus, but it can’t form a theology that will carry you through a life of faith in an ugly world.” (Patheos, Jonathan Aigner)

These songs often feel like watered down versions of the gospel, too commercialized to feel like praise or an outpouring of one’s soul to God. (Take Flawless by Mercy Me, Diamonds by For King and Country, or Just Be Held by Casting Crowns for example.)

Not only that, but when one compares the sheet music for these songs to a piece of classical music or any more developed piece, one wonders at the lack of musical ingenuity and individuality. Does every piece need to be a Chopin ballade? Of course not. But music can be excellent in both message and technique without being as grand as Chopin.

Christian fiction suffers from a terrible lack of quality – in writing, plot, and depth. Recently I went to the library with my sister and as the two of us were perusing the shelves, my elementary school sister noted that most of the Christian novels she picked up looked like romance paperbacks. She has a point. Not much separates a number of them from that genre save the lack of graphic lust. Romance without depth is meaningless.

It’s not just romance though, its the lack of higher thought and in-genuine portrayal of life in these novels that makes them so cheesy.

(Not to say that all Christian films, songs, and books are of low caliber. I’m just pointing out that there’s an abundance of shallow and few-and-far-between depth.)

When one looks back at Christianity and takes a look at the poets, painters, and filmmakers of the past one notices something about their work that much contemporary compositions lack.

One sees Bach, a man of profound musical talent, who poured beauty and truth into his work, and signed his masterpieces with Soli Deo Gloria and Jesu Juva (Glory to God Alone and Help Me Jesus).

One looks at Michelangelo, an artist of unparalleled talent, the painter of the Sistine Chapel and the sculptor of David, and the man who prayed “Lord make me to see your glory in everything.”

One views a painting by Rembrandt and is moved by the vulnerability, the emotional depth, and the realness of his Biblical scenes.

One examines Dostoevsky, his soul searching works and searing philosophy, and wonders at his words “If you believe in Christ, then you believe you will live eternally.” One examines Dante’s The Divine Comedy and ponders the connections between our faith, our actions, our eternity, and judgement.

One reads C.S. Lewis’s The Chronicles of Narnia and is amazed to find such beautiful gospel imagery, imagery that both delights and leads one to think more profoundly about the Lord.

One watches Terrence Malik’s The Tree of Life, a film that “is both implicitly and also explicitly worshipful, structured as liturgy and honest about the struggles of faith. Infused with biblical words and imagery from start to finish, and lovingly rendered by a Christian artist who ponders God, sin, and redemption in all of his films,” (Brett Mccracken, The Gospel Coalition) and wonders at the honesty, the poetry, and the truth conveyed.

One listens to the music of Andrew Peterson and is encouraged by his poetic and thoughtful lyrics. One hears the Psalms set to music by Shane and Shane and is brought to worship by the powerful combination of instruments and Biblical truth. One hears Audrey Assad and is amazed by her voice and insight in her words.

One reads Marilynne Robinson’s Gilead and is brought to deeper feeling and thought of the connections between ourselves and our neighbors, as well as how our faith impacts both our lives and theirs. One reads Christa Parrish’s Still Life and better understands the perseverance, vulnerability, and courage of faith in the Lord.

Not all genius and creativity are in the past, by no means is that so. And one doesn’t need to be a genius to convey truth beautifully. Not always at least.

No, rather than it having died, it’s that we have the God-given, image bearing, capability and capacity for creativity, intelligence, and depth but we so often neglect these deep streams to drink from shallow waters.

Art should be expressed with “skill, artistic integrity, and a sense of wonder.” (Terry Glaspey) And yet, it hasn’t been expressed this way by Christians as of late. We push off what is deep for something cheap.

The arts are poignant and powerful tools, ones that spiritually impact in ways sermons never could, and its a terrible thing to lessen their caliber. A horrible thing. A terrifying thing.

Our art must be deep. It must be earnest. It must be poetry. It must convey a sense of wonder. It must point us and draw us to the Savior and Creator.

Handel, the composer of the Messiah oratorio, said upon being told his oratorio was ‘entertaining,’ “I should be sorry, my Lord, if I have only succeeded in entertaining them; I wished to make them better.”

This, this, is what we should, what we must embrace and entwine in our art as believers.

10 thoughts on “Aspects of Importance”